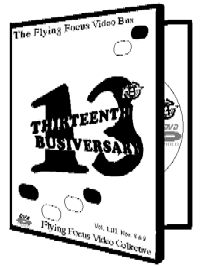 The Flying Focus Video Bus celebrated its "Thirteenth Busiversary," (VBs #53.8&9) marking 13 years since our weekly half-hour program premiered on November 18, 1991, with two episodes in November, 2004. Seven volunteer producers, usually hidden behind the scenes, come before the cameras to introduce clips from their shows.

This year featured quite a number of shows revolving around the occupation of Iraq and the Israel/Palestine situation. Three shows featured (1) an American woman from a progressive think tank (2) an Israeli former soldier who refused to serve in Lebanon and supports others who refuse to serve in the occupied territories and (3) a Christian Palestinian minister. Others revolved around "organizing for change" (nonviolent communication, anger management, and cultural conflicts). Two-minute clips of these and other shows (some of which are also described in this newsletter) can be seen on the "Busiversary."

The Busiversary was the first-ever program of Flying Focus to be released on DVD in a limited edition. As you will see in our new catalog, we are currently offering all programs on DVD for a suggested donation of just $2 more than on VHS -- $11 for half hour shows, $14 for one-hour shows, and $17 for longer shows.

Jack Duvall, author of "A Force More Powerful: A Century of Non-Violent Conflict," was the main speaker at a conference held in Portland in July, 2004. In the program named for that conference, "War, Peace and the Media" (VB #53.1), he discusses the drawbacks and successes of non-violent struggle. He points out that violent revolutions, particularly in the 20th Century, never have led to the establishment of stable, civil societies that are free and open. Duvall contrasts such struggles with examples like Gandhi's opposition to British rule in India, America's civil rights movement, and Polish union solidarity leading to the fall of an oppressive Communist regime there.

In addition to bringing out information that is usually ignored by mainstream media, we like to bring you ideas from people with a vision of a more peaceful, sustainable way to live. A couple of our new programs feature two very different people who share the courage to speak of love and to walk their talk.

Howard Lyman is a fourth generation cattle rancher whose life was saved when he switched to a vegan diet. He worked as a lobbyist on Capitol Hill until he discovered the truth in the golden rule (them that's got the gold makes the rules). A dynamic speaker, he now travels tirelessly, working at a grassroots level to educate Americans about how to help the environment, animals and human health through diet and lifestyle changes. His talk in Portland last September as a benefit for NW Veg is captured in "Howard Lyman: Voice for a Viable Future" (VBs #54.4&5). 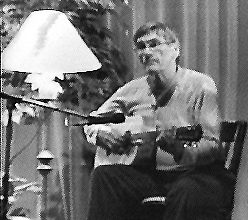 Marshall Rosenberg grew up in an area of Detroit where gang activity was prevalent. He was interested in why some people joined gangs and committed acts of violence, while others in similar circumstances did not. Concluding it was due to styles of communication, he developed a program called Non-Violent Communication which has been used for years to resolve all sorts of conflicts--from couples contemplating divorce to rival gangs to Israelis and Palestinians. In "Marshall Rosenberg: Introduction to Nonviolent Communication" (VBs #53.4&5), he uses humor and compassion to explain the basics of his vision of using responsible communication to reduce conflict.

Attorneys Kohel Haver and Bert Krages cover important information for any artist interested in protecting his or her creative expression against theft or misuse, in "Copyright and You" (VB #53.11). Kohel Haver, an attorney specializing in copyrights and intellectual property, and Bert Krages, an attorney and author of "The Legal Handbook for Photographers," discuss many issues concerning copyright, including: misconceptions about what can and cannot be copyrighted, why you should register your work with the copyright office in a timely manner, ways to save money in the registration process, and what constitutes infringement. This discussion was taped on September 11th, 2004 at the Beaverton City Library, and sponsored by the Beaverton Arts Commission. 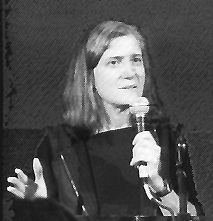 Amy Goodman, one of the country's top progressive journalists, has been on Pacifica Radio for 19 years and its top show "Democracy Now" for eight years. Flying Focus produced a two-part show from her May, 2004 stop in Portland on her cross country "Exception to the Rulers" book tour (VB #53.13&#54.1). Always an engaging and impassioned speaker, Goodman discusses the importance of independent media as well as stories and issues covered in her book of the same title.

Part 1 covers the origins of Pacifica, corporate media consolidation and its non-critical approach to government policy, her experience on the Sally Jesse Raphael Show, and September 11th. Part 2 covers Haiti and Goodman's exclusive interview with ousted President Aristide, East Timor and her near fatal experience there during a massacre by Indonesian soldiers, the countrywide expansion of Democracy Now, and citizen responsibility in local and national politics.

One of the early proponents of Cable Access Television, Dee Dee Halleck, sat down for an interview with Flying Focus in April, 2004. The resulting one-hour program, "An Afternoon with Media Activist Dee Dee Halleck" (VBs #52.11&12), covers her background as a founding member of Paper Tiger TV (one of the role models for Flying Focus), its expansion through satellite to Deep Dish TV, and more current grassroots-accessible means of communication such as Indymedia. Halleck's commitment to getting cameras into the hands of those with little or no voice or political power has brought her to various places around the world, and her inspiring stories reveal as much about the power structure that keeps mainstream media in support of war and globalization as it does about her long career producing programs and teaching others.

What are the problems facing homeless people with regards to police in New York, Los Angeles, and Portland? How about Tasers, the weapons that police use to jolt suspects with 50,000 volts of electricity? And how do communities organize after police shootings, follow up on complaints, and structure their civilian review boards? Six volunteer Flying Focus videographers taped two days of workshops and a candlelight vigil at the 2004 National Conference on Police Accountability held in Portland in October. The footage has been edited down to nine hours of information-packed panel presentations and is available in five parts, separately or together as a package (SE #101.1 through #101.5--see below for details). At this important event, activists from all over the country discussed the above issues as well as how police sometimes target communities of color, sexual minorities, immigrants and activists.

Click here for info on 2004 National Conference as text