Yvonne Simmons, a Flying Focus Associate Member, spent 9 months in Bosnia/Herzegovina and Croatia beginning in September 1997. Through the difficulties of living and working during and after a horrendous war, she says, she has come to terms with her personal vulnerabilities. Feeling the pain, anger and vulnerability of the women and children there, who have no sense of justice being done, Yvonne felt a worldly pain in the face of senseless violence.

The program, "Back from Bosnia '98: Yvonne Simmons' Fourth Peace Journey" (VB #28.13/29.1) features an interview with Yvonne in which she describes the work she did including mine awareness, animal rescue, and what the Bosnians referred to as "therapy"--helping people laugh. Yvonne brought a VHS camcorder with her and so the show is able to feature several segments including Yvonne singing with young refugee children.

Yvonne is currently planning Peace Journey V for December this year, to try to help bring a non-violent peace to the Balkans.

Three recent Flying Focus programs feature women working for change. In "Homeopathy: Natural Health Care" (VB 28.1), Diane Danielson spoke at the second 'Against Animal Testing' conference put on by the Liberation Collective in May, 1998. She describes the benefits of eating low on the food chain and how a healthy lifestyle and the assistance of natural, proven remedies can often preclude the need for the drugs and surgery foisted on an unwitting public by the AMA.

Ramona Africa visited Portland in April. She spoke eloquently about Mumia Abu-Jamal, journalist and author; the revolutionary vegetarian family of John Africa, MOVE; and other Americans who have been imprisoned for speaking out against our repressive system and the police brutality that helps keep it in place. She urges each of us to find our own special way to work for change and to support those on the front lines who speak out on our behalf. ("Ramona Africa On MOVE, Mumia and Political Prisoners", VB 28.7&8)

In "Active Women" (VB 29.3), see Mary Burwell, everyone's hostess with the mostest, interview Sara Kirschenbaum, artist and mother; Jen French, formerly of the Clackamas Women's Services; and Kathy Bachman of Amnesty International and Planned Parenthood. These women discuss art, activism and social work and how these affect their families and personal lives. 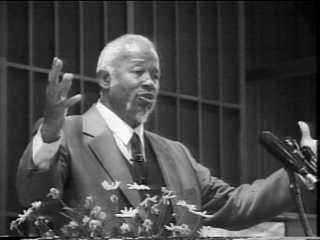 Three Popular Speakers Have Their Say

The ever-popular progressive powerhouses Howard Zinn and Michael Parenti are featured in two new Flying Focus programs. Zinn examines how historical perspectives are closely related to one's political perspectives and vice versa He reflects on the awareness of class divisions and the insights it can provide in studying history to understand both the struggles of the past and the present. ("Howard Zinn: The Use and Abuse of History", VB 29.4&5)

Parenti analyzes how mass media ownership and content function to under-represent class struggles, distorting what little discussion there is of class in the U.S. His talk, "Michael Parenti: Media Monopoly and Class Power" (VB 25.8&9) examines the power of the owning class and how that power has serious costs for workers and citizens.

Finally, the truly unique Eldridge Cleaver, a former Black Panther who left the U.S. for many years and returned a changed man, gave a speech in Portland this April. It turned out to be his last public appearance before his death. Recorded for all time is a man whose main hope is that people will act to preserve the earth and its environment ("Eldridge Cleaver at Earth Day '98," VB #27.9&10). He acknowledges his varying philosophies of the past, giving us all inspiration to think and re-think our beliefs as life moves on.

This September Flying Focus producers Dan Handelman and Barb Greene visited a Paper Tiger Television meeting in New York City. PTTV has been an ongoing inspiration to Flying Focus, and has been "smashing media myths" for 17 years. They have, however, only recently undertaken the task of incorp-orating and seeking tax-exempt status from the IRS. So fortunately, Flying Focus has been able to repay Paper Tiger for their years of insight and experience by sharing our knowledge with them!

of using child labor, underpaying workers, and allowing unthinkable working conditions in Indonesia and Asia are well documented. In "International Day of Action Against NIKE 18 APR 98" (VB 27.7), activists gather at NIKETOWN in downtown Portland. They carry picket signs, as well as large puppets of Gen. Suharto, the now-deposed leader of Indonesia, Phil Knight, CEO of NIKE, and President Clinton.

In "THE BIG ONE the film MICHAEL MOORE the filmmaker" (VB 27.5) comments by the sharply satirical film-maker act as book-ends to an interview with activist Cindy Chan of Portland's Justice Do It, NIKE coalition. Moore came to Portland for a special premiere of his film "The Big One" in which he confronted Knight about NIKE�s labor practices. 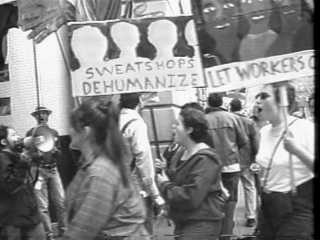 Protesters get their message out at Portland's NIKETOWN in "International

Seventh Busiversary in the Works

By the time you read this, we will be busy producing our Seventh Busiversary. Imagine it--seven years of the Flying Focus Video Bus in the same time slot on cable access. It has taken dozens of producers and hundreds of supporters to bring us this far, and we thank everyone who has made our first seven years on the air possible.

Many of you received notice when we changed the mailing address of Flying Focus. For those of you haven't written it down yet, our new address is:

Our phone numbers, e-mail and web site all remain the same. We do, however, have many expenses in following up any corrections to the old address.

We are also poised to upgrade some of the video equipment we have in our office--which may help us create more intricate, engaging programming and free up more of our time when we are editing at the cable access facilities. Any amount of money you can send will help with our meager $5000 annual budget. Please donate today--you can even ask us to set the money aside specifically for: Lending libraries, equipment, public showings, or office expenses. And for those of you who donated to us during our summer fund-raising drive--thanks a million! We raised over $850 in a few short weeks thanks to your generosity!